It may not look like much, but the following document made the AMA a stand-alone organization. Originally a part of the NAA, the AMA became its own separated entity on October 26, 1966.

What followed this first page were the Articles of Incorporation, which included a listing of the then-current Board of Directors, as well as the signatures of those designated the “Incorporators” of the AMA.

Almost as soon as enthusiasts began building and flying model aircraft, discussions about how to encourage others to join in the fun began. A model airplane was needed that was both easy to build and easy to fly. 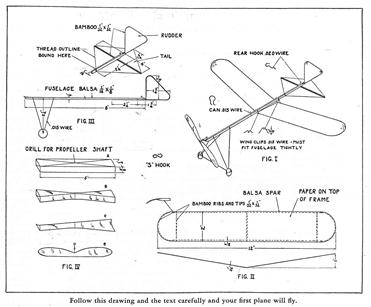 Other simple designs followed but in 1966, Frank Ehling’s article in SIG Air-Modeler, Nov-Dec, introduced a model airplane that would become the introductory model. Named the AMA Racer, the rubber-powered model featured a preformed plastic propeller, balsa fuselage, spruce tail boom, and pointed wings that could be slid fore and aft.

In the American Aircraft Modeler, April 1967, a slightly modified model called the Delta Dart appeared and while almost identical, the wing was no longer adjustable. 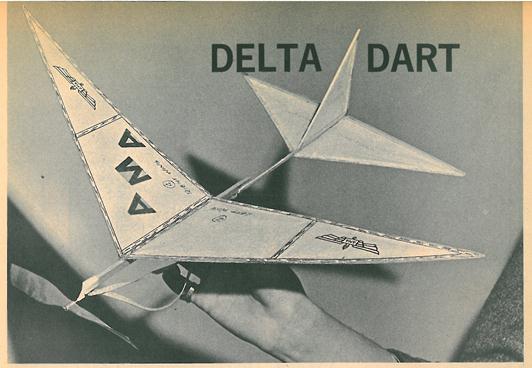 Dick Meyer put the Dart to work first, using the model in a junior program for the Allegheny Model Aeronautics Council. (American Aircraft Modeler, April 1967, p. 21) Dick and his wife made up 300 kits with material donated by SIG Mfg Co. Leftover kits were then taken by AMA staff to the 1966 National Aeromodeling Championships where the model’s popularity with kids influenced SIG to offer the model as a kit, called the AMA Racer.

An updated version of the Dart, the AMA Cub, was introduced in 1968 with a single piece diamond shaped wing, but with a single balsa stick fuselage. 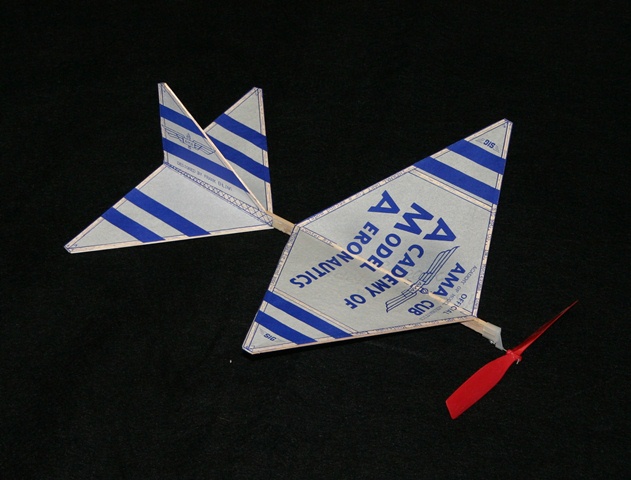 It was with the AMA Cub that the Academy of Model Aeronautics (with additional sponsorship provided by the Aero Club of Washington and Hobby Industry Association of America) introduced youth ages 6-16 to modeling at the National Capital Aeroplane Championships in Washington D.C., June 1969. The children built their Cubs in the lobby of the Smithsonian’s Arts and Industries building underneath the original 1903 Wright Flyer and Spirit of St. Louis. Once finished, the kids moved outside where more than 500 official flights were recorded. The US Navy, who also cosponsored the event, offered the meet champion a day’s cruise aboard an aircraft carrier. (American Aircraft Modeler, October 1969, p. 17) 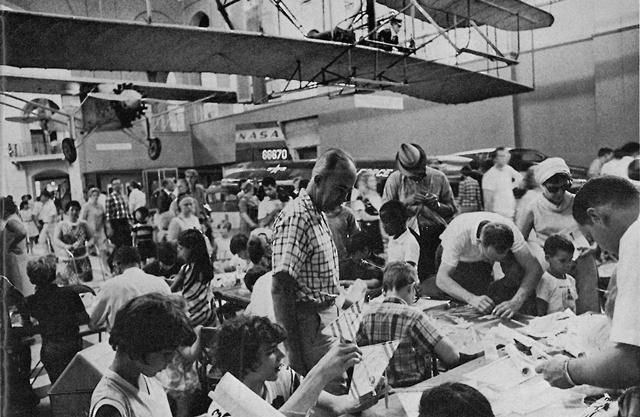 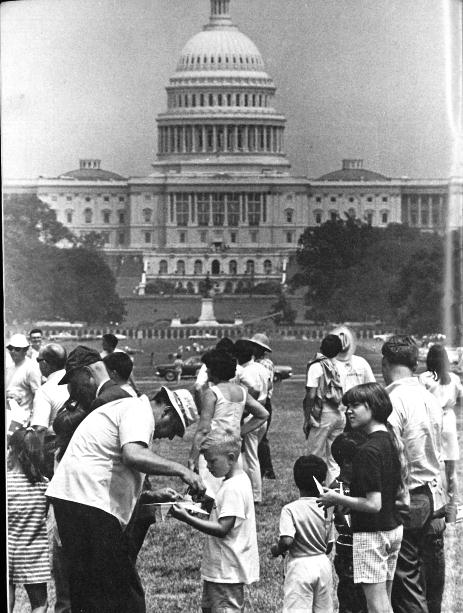 In American Aircraft Modeler, August 1970, Ehling introduced an enlarged version of the Dart, the Thermal Dart. The model featured the same wing and tail shape but the wing was larger and the fuselage was one stick of balsa. 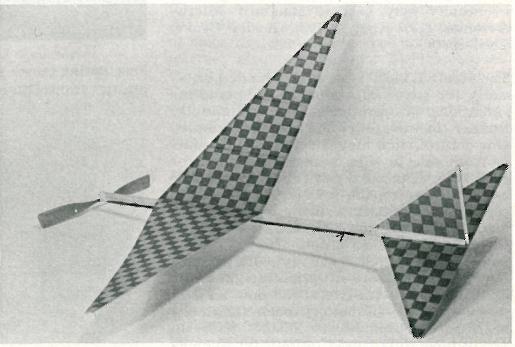 The Dart-Too, designed by Ehling as a follow up model to the AMA Cub, used the Cub’s wing and tail but with a profile fuselage and landing gear. This model appeared in Model Aviation magazine in July 1975. 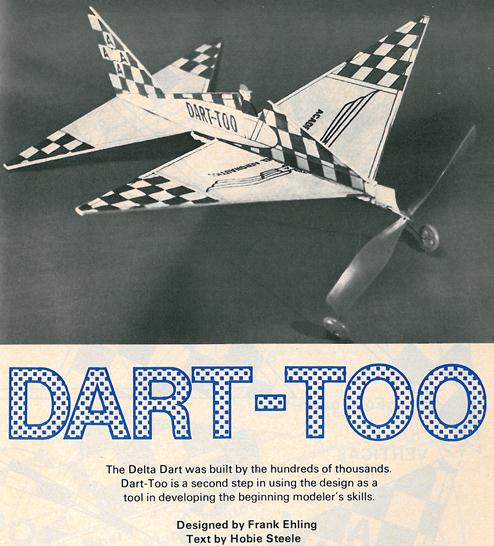 (click here for construction article)
In 1979, the Department of Transportation / Federal Aviation Administration, in cooperation with the Academy and Hobby Industry of America, released a Delta Dart Teacher’s Guide for grades 3-12. The program highlighted how the Delta Dart could be used to help teach Language Arts, Mathematics, Geometry, Social Studies, Science, and Industrial Arts. This document is available on the American institute of Aeronautics and Astronautics, Inc. web site by clicking here.

In 1990 the Delta Dart served as the centerpiece for the Smithsonian Air & Space Museum’s (NASM) formal dinner to highlight the proposed expansion of the museum with the Dulles facility. (Model Aviation magazine, Aug 1990, p. 91)  Admiral James Busey, administrator of the Federal Aviation Administration, directed a mass launch of more than 100 Darts at the conclusion of the dinner. 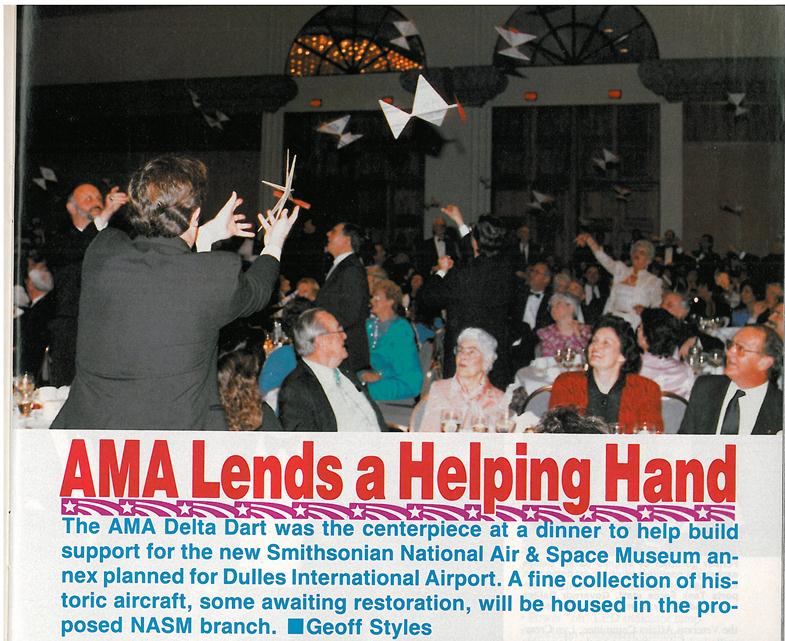 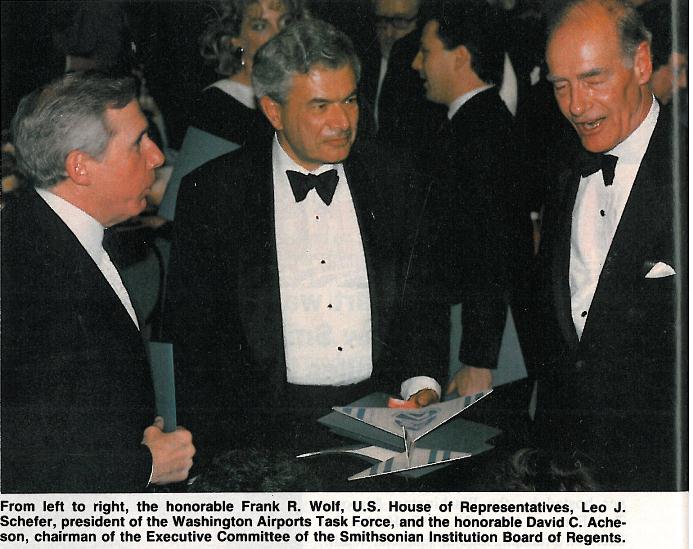 Today AMA Darts, Cubs and Racers continue to be an important part of aeromodeling education. Simply searching the web for AMA Cub or Delta Dart will provide you with a number of wonderful sites offering both instructions and videos of these models in flight.

Electric propulsion for flight has been around for well over 100 years. In the book The Quiet Revolution, author Robert J. Boucher notes that the earliest recorded success was the Dirigible La France of M. Renard and M. Krebs which first flew in 1884. He also notes that electric motors were used with very lightweight Free Flight models with one-shot saline batteries in the 1960s and in 1972, it was considered a viable option for larger RC models.

The term “park flyer” was coined to describe a class of small, electric-powered RC aircraft. The name stemmed from their ability to be operated within the confines of a park, thanks to their size, speed, and relatively quiet operation. The AMA defines a park flyer as a model weighing two pounds or less and incapable of reaching speeds greater than 60 mph. They must also be electric or rubber powered, or of any similar means of quiet propulsion.

Early models, such as the GWS Tiger Moth, were commonly constructed of foam and used brushed motors and Ni-Cd batteries. Advancements in technology enabled the components to become smaller and more reliable. Ni-Cd batteries gave way to NiMH and they were then replaced by LiPoly cells. As with battery technology, brushed motors also improved and brushless inrunner and outrunner power systems provided much more power and efficiency.

Today, electric motors can reliably power any size RC model as well as full-scale aircraft. They have made the dream of flying aircraft and helicopters indoors possible within the confines of a typical living room. Their simplicity has opened the door to anyone who has interest in flight and their quiet operation has allowed them to be flown where gas- and glow-powered models cannot. Electric-powered models, once considered “toys,” have proven their worth and commonly outperform their internal-combustion counterparts, earning them respect across the modeling community.
1. 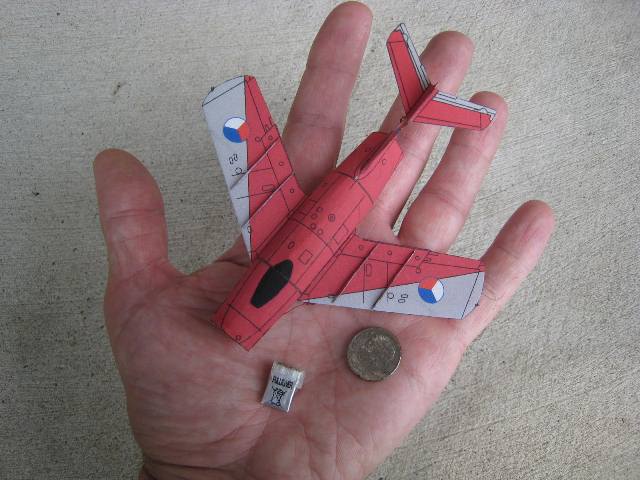 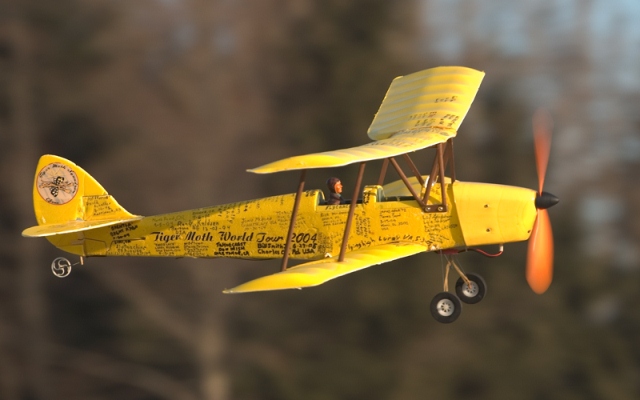 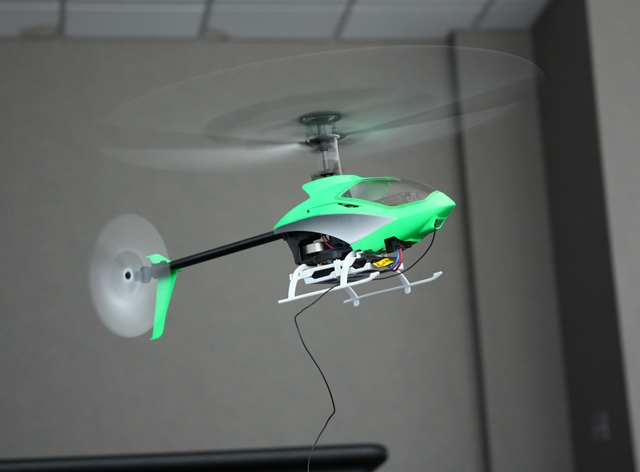 3.  The author flies the Hirobo Quark in a conference room. Photo by Michael Ramsey.

Week 1 – October 6, 2011: District Division History
In 1940, the AMA announced that it was merging with the National Aeronautic Association Modeling Division. Previously, the two groups performed complimentary, but separate operations. When the merger was complete, the AMA, while still affiliated with the NAA, was the united, national voice of modelers – by modelers, for modelers, as the saying goes. As a result to this merger, the AMA organizational structure had to be overhauled so it would better represent modelers across the country. During the overhaul, 11 districts were outlined in Article VIII, Section 6 of the new 1940 bylaws. Each of these districts was to have 1 Vice President, voted for by the members in that area, to sit on the Executive Council. Since the by-laws went into effect immediately they allowed for the four sitting Executive Council members (originally the President, Secretary-Treasurer, East Coast Vice President and Midwest Vice President, and now the President, Secretary-Treasurer, District II and District VI Vice Presidents respectively), to appoint a person to each of the remaining Executive Council seats until the elections could be held the following year.

The district divisions are almost exactly the same as they were in 1940. The only changes have been additions to ensure that new states, such as Alaska and Hawaii, and the U.S. territories of Puerto Rico, Guam and the U.S. Virgin islands were covered. 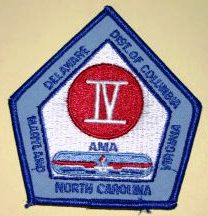 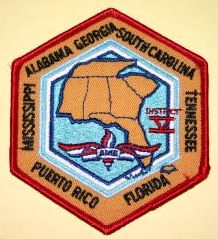 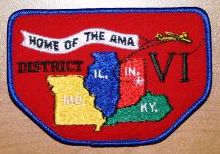 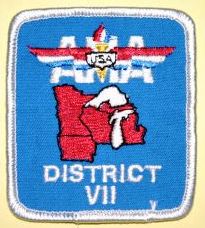