“Celebration of Eagles,” July 6-7, 1996
The AMA hosted its 60th anniversary on the Muncie site, dubbing the two-day party a “Celebration of Eagles.” A reception was held in the Museum on Friday, then on Saturday fun flying started. Right after the celebration, the Nats commenced on-site. This was the first time the outdoor Nats was held exclusively at the Muncie location.

“Celebration of Eagles II – Year of the Pioneer,” September 11-12, 1998
The Pioneers Party, a reception at the Museum, was held again on a Friday. They focused on members who had been with the AMA for 50-plus years. John Worth co-hosted the ceremonies this year with Norm Rosenstock. About 300 people attended. Once again, Saturday had open flying, as well as an evening banquet at the Pittenger Center on Ball State Campus.

“Celebration of Eagles III,” June 8-10, 2001
A much smaller gathering, many of whom were members of the Society of Antique Modelers, celebrated at a Saturday night banquet at the Horizon Convention Center in Muncie. Those who attended included Joe Beshar, Len Purdy, George Perryman, Joe Elgin, Phil Klintworth, and Sal Taibi. Around 100 people attended this. This was the last Celebration.

For more information about the three celebrations, see articles printed in these Model Aviation issues: November 1996, February 1999, and November 2001. If you are an AMA member, after logging into the website, you can access the 1996 and 1999 issues in the online MA archives at https://www.modelaircraft.org/MembersOnly/archive/. 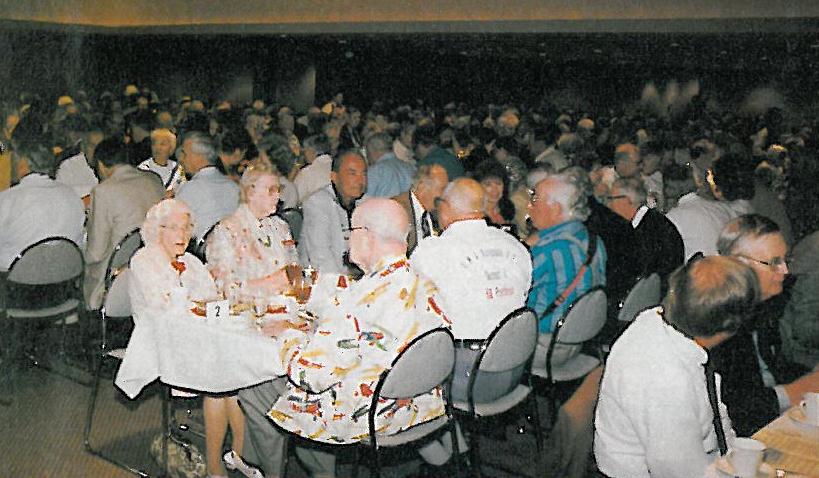 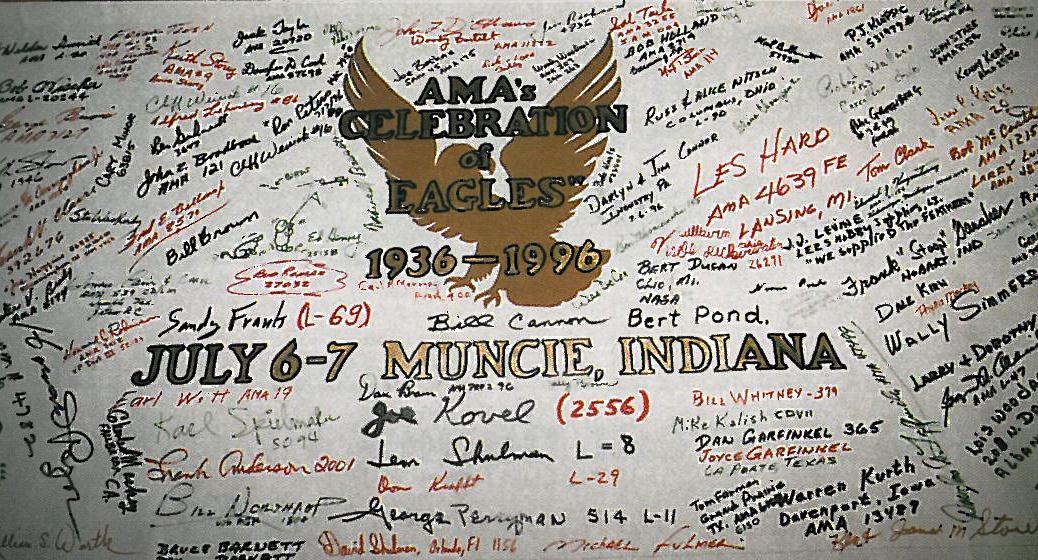 2. “How many Hall of Fame members’ and other modeling legends’ names can you find on this commemorative banner?” [Source: Model Aviation, November 1996] 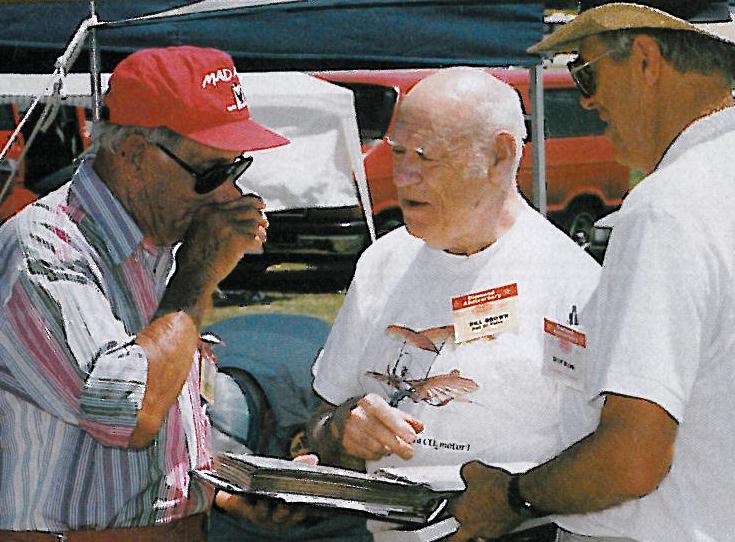 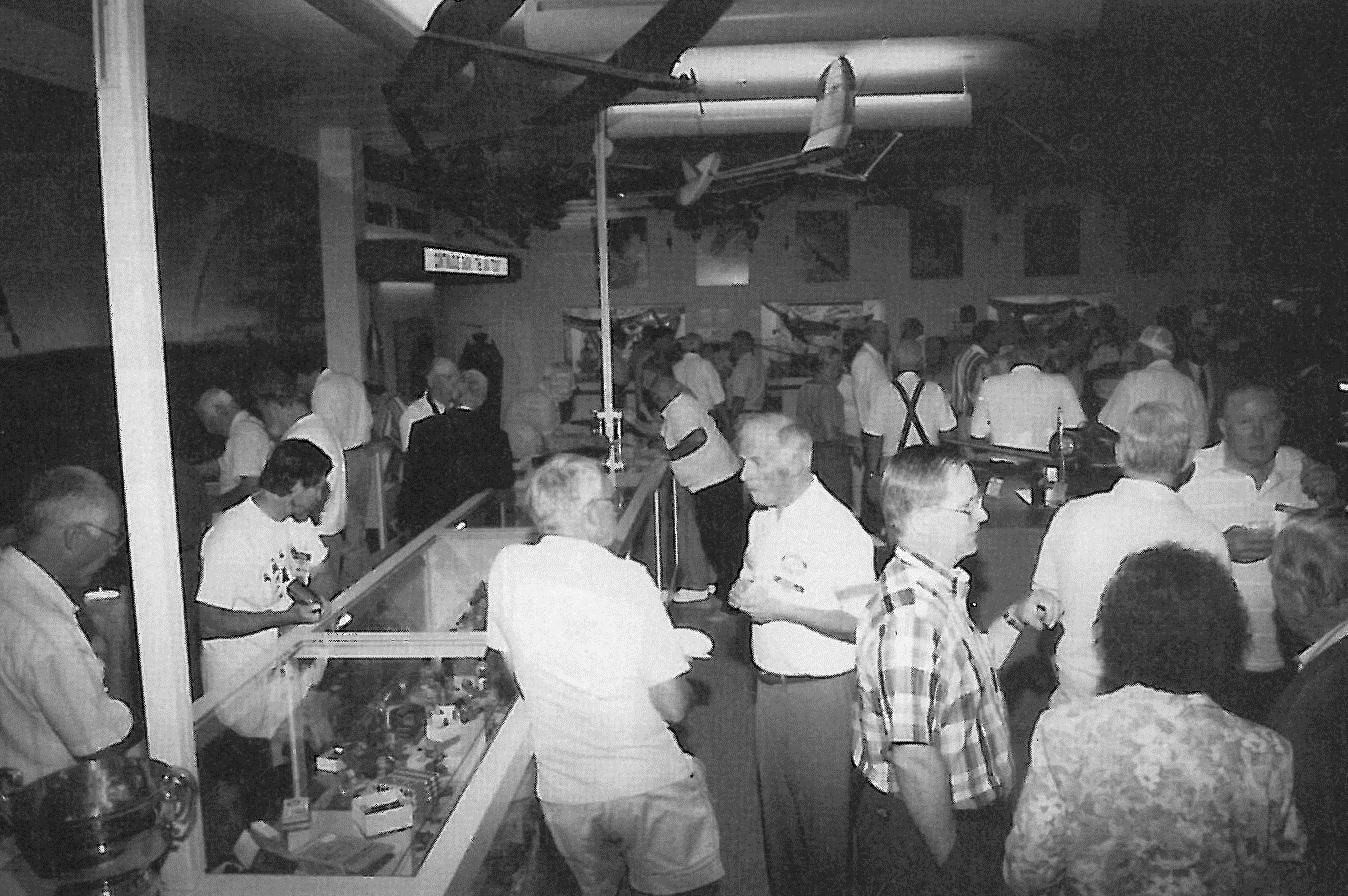 Ms. Todd, from her childhood, was always interested in how things worked. She would disassemble toys, typewriters, and was once even scolded for using her mother’s scissors to cut wire. This interest in tinkering led her to design and patent a type writer copy holder in 1896. By the turn of the century her interest turned to aviation, and she began to experiment with rubber-powered models and airships. In 1906 she displayed one of her aircraft at the Aero Club of America show, held in Grand Central Palace, New York. According to period newspapers, her machine “attracted wide attention” and “more attention than any other display.” Mr. Andrew Carnegie would even spend several hours every day of the show with Miss Todd discussing her machine. (Evening World, December 4, 1906) In 1908, convinced that youth were the future of aviation, Miss Todd formed the Junior Aero Club of America. “In the increasing interest in aerial maters in this country, and because I personally know several bright boys who have shown remarkable ability in designing aeroplanes; and, second, owing to the success of recent contests in France, ….there is no reason why similar tests cannot be made here.” The new organization “was to be National in character, and the aim of its promoters is to establish branches in as many of the principal cities throughout the country as possible.” (The New York Times, February 10, 1908) 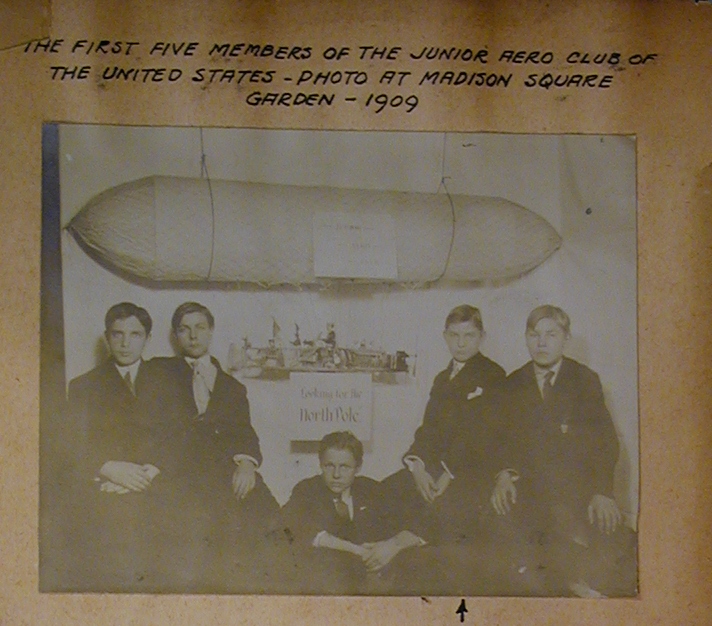 The first event for the club was a kite contest, attended by more than one-hundred people and held February 21nd, 1908. “The meeting was held to arouse enthusiasm among boys interested in aeronautics. It is the intention of Miss Todd to lecture every Saturday afternoon at her office, demonstrating the problems of Aeroplane construction. (New York Hearld, February 22, 1908) The New York chapter met in Miss Todd’s apartment, surrounded by her models. 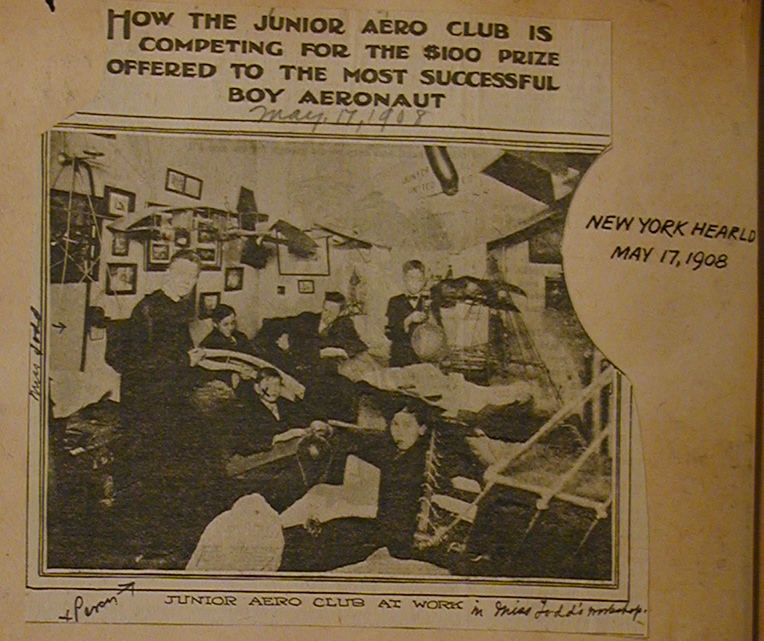 On April 4th, 1908 club members meet on the roof of Leo Stevens’ balloon shop and released hydrogen filled balloons with cards attached asking those that found the balloons to write back.

In 1909 the Junior Aero Club was reorganized under the direction of Edward T. Durant, as Miss Todd was devoting all of her time to the construction of a full-scale aircraft. On November 8, 1910, Didier Masson successfully flew her aircraft at the Garden City Aviation Field. Image of Miss Todd in cockpit of her aeroplane, Source: Library of Congress, LC-USZ62-15081
Following this flight it is unclear if Miss Todd continued with her experiments, moving to California in 1936. Her model club though continued and lasted for many years.

For more information on both the Junior Aero Club and Miss E.L.Todd please visit: https://chroniclingamerica.loc.gov/  and https://query.nytimes.com/search/query?srchst=p  Seach for either Miss EL Todd or Junior Aero Club and you will find many great stories about their activites.

So read Charles H. Grant’s call to arms for members of the International Gas Model Airplane Association (IGMAA), Model Airplane News, August 1937, p 7.
The message was in response to the concerns that gas model flying would no longer be allowed. Registrar Frank Goodwin of Massachusetts ruled in 1937 that “gas powered models are legally aircraft and cannot be flown in the state of Massachusetts unless licensed and operated by licensed pilots.” (Model Airplane News, October 1937, p 28) Likewise, the Connecticut Commissioner of Aeronautics issued a regulation that “No model aircraft shall be flown in or over the State of Connecticut if powered by any means other than rubber bands. (Model Airplane News, November 1937, p 24) The United States Board of Commerce even began to investigate.

The IGMAA and its leaders along with the National Aeronautic Association and its model airplane division (the Academy of Model Aeronautics) lobbied for the benefits of gas model flying.

A delegation of Department of Commerce officials was brought to the 1937 National Aeromodeling Championships, after which they decided that gas models should not be banned and that restrictions placed upon the flying of gas jobs by the contestants themselves at the present time were sufficient.” (Model Airplane News, October 1937, p 18)

The actual authority of the IGMAA to make rules however was called into question, as it was sponsored by a commercial organization. To solve this issue, the IGMAA became a part of the NAA, as the Gas Model Division, and “Leaders in gas model building will be selected to sit upon a governing board in the Academy of Model Aeronautics. (Model Airplane News, February 1938, p 16-17) A “National Aeronautic Association Junior Membership News” article in Model Airplane News, February 1938, page 24, outlined the program and encouraged IGMAA members, at a cost of $1, to join the new division and receive a certificate attesting that they were an “early bird” and a pioneering member of the new division. Most importantly it also outlined the “Official Gas Model Fliers Pledge” that all members needed to agree to.

With the establishment of the new division, the NAA promoted the value of aeromodeling, and criticisms, concerns, and attempted bans disappeared.

The IGMAA had been formed in 1936 by Grant, who was a gas model airplane enthusiast and also the editor of Model Airplane News magazine. As editor, Grant saw how gas models were becoming an important part of aeromodeling, from homebuilt engines to the prototype Brown Jr. engine that Maxwell Bassett used to win all 3 outdoor events at the 1933 National Aeromodeling Championships. (Model Airplane News, July 1933 p 22) At the same time he also noticed the growing negative comments, and so in the December 1935 issue of Model Airplane News a questionnaire asked readers for their opinions on gas model aircraft. The responses he received encouraged him to create the IGMAA. He introduced a special feature article in Model Airplane News, “Gas Lines,” to highlight the activity of members and units.

The stated purpose of the IGMAA was “to promote the activity of gas model airplane building in all its phases and in this way provide intimate knowledge of airplane design and construction and motors so that young men may have a clear conception of problems of aviation before they undertake their life work in this field.” (Model Airplane News, April 1936, p 8) 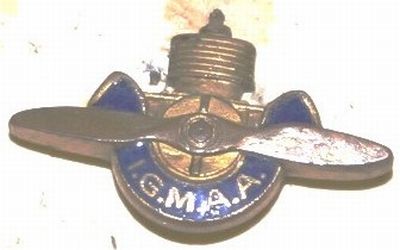 Dreamers, researchers and innovators have been using models for centuries in attempts to fly.  Here’s just a few examples.

Sir George Cayley, often called the Father of Aeronautics, designed a helicopter powered by a bow-string mechanism with feather blades (similar to the reproduction shown here). 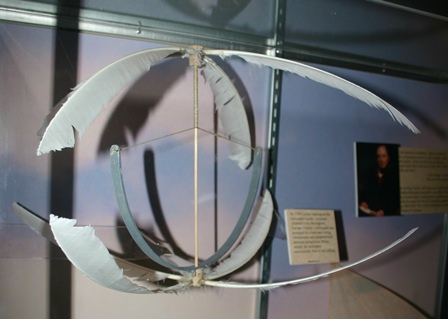 Later, he experimented by flying a model with multiple adjustable surfaces, allowing him to understand how every change affected the model’s flight. This model is a ½ scale replica of his original 1804 model. Cayley used the data from these experiments to publish his On Aerial Navigation in 1809. 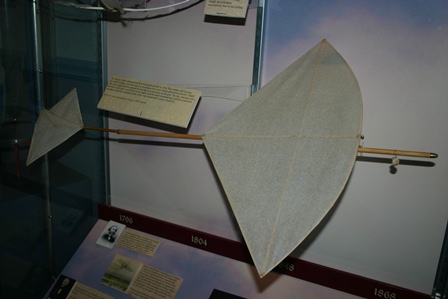 Following these experiments, John Stringfellow attempted to build a flying machine using a steam powered engine. The most successful of his attempts was in 1848 with a single wing plane that was guided along a wire before gaining suitable momentum and being released. The museum’s ½ scale reproduction is complete with the “liberator” (the guiding device) and wire.

Chuhachi Ninomiya built a rubber-powered model aircraft in 1891 based off of concepts he learned while flying kites and watching birds fly. Ninomiya designed an aircraft for human flight in 1893, but could not find the funding to build the machine. 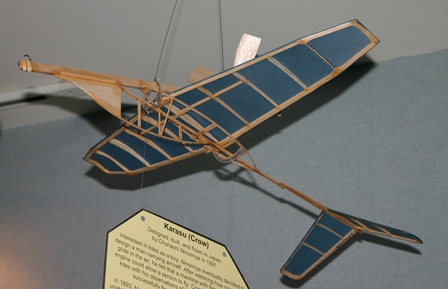